Aren’t these adorable? I know they are. They’re definitely not scary at all. But maybe the Wicked Witch of the West wouldn’t have been so upset if Dorothy had dropped a cupcake on her sister, instead of a house. Don’t you think?

So, it’s getting close to Halloween. Everyone is either having a party, going to a party or expected to make something for a children’s party… or just for the kids, period. You need something easy but cute to make (and maybe use to impress people with your creativity) and I have just the thing- these!

Black and white with a little green is my favorite Halloween color combination. I usually avoid black and orange because it’s everywhere. It’s also really versatile, it can be used for witch cupcakes, monster cupcakes, vampire cupcakes… just about anything! And if you get a lot of black or black & white cupcake liners, you can also use them year-round for other things.

But anyway today we’re talking about witches. Wicked witches- who had a cupcake fall on them- with legs made of striped paper straws and shoes made of black paper. So easy!

Here’s how I did it: Like I said, the legs are just cut off pieces of paper drinking straws. You can buy these straws at most craft stores, baking supply shops or on Etsy. I used green/white and black/white striped ones, but red/white would be cute too! Just cut them to around an 1″ – 1 1/2″ length, and squeeze one end a bit to flatten it. That’s the end the “shoes” will be glued on.

For the shoes, I drew them out on folded black cupcake liners so that the heels were positioned on the crease; that way when I cut it, I had both sides of the shoes done and I just had to Elmer’s glue them together around the straws. I freehanded the drawing of the shoes, and it wasn’t hard at all (it’s kind of a basic shape that takes well to exaggeration and imperfection). You can use black construction paper, too.

However, a simple Google search will turn up tons of witch shoes that you can either trace or print out and cut to use. I made a few pairs of these legs + shoes, glued them all together and set them aside to dry. 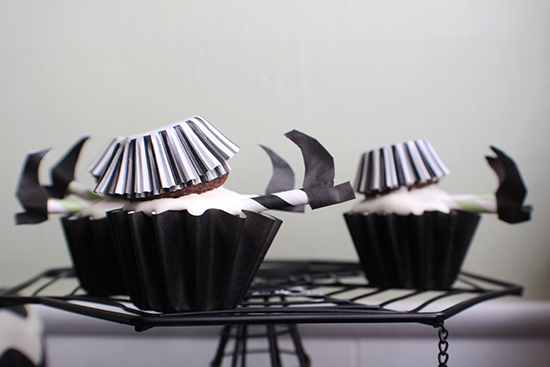 Meanwhile I made my cupcakes. I made Devil’s Food, but any cupcakes will do- boxed cupcakes, from scratch cupcakes, any flavor! -just be sure to make the same amount of mini-cupcakes that you do regular-size ones. When my cupcakes were ready and cooled, I piped a fat circle of marshmallow Fluff on each of the large ones using this pastry tip in a disposable decorating bag, then stuck the legs in and then plunked a mini-cupcake on top, upside down. You can also put them right side up if you prefer! Any and all kinds of frosting works as well. Green frosting would be adorable, and chocolate works great too. 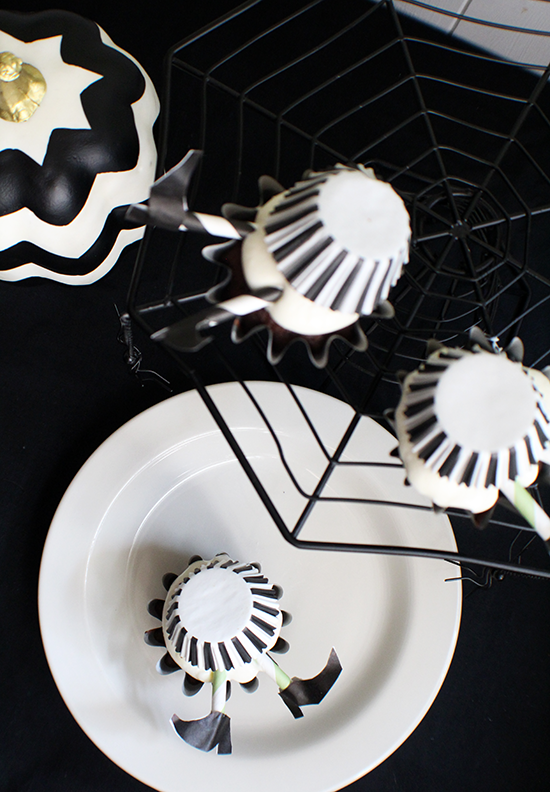 Have fun, everyone! For more Halloween-y ideas check out these posts: